I’m starting a new series, called Shit On Sale, because I’m not your average gear blogger and I’m a very average outdoorswoman. I’m independent – no companies are seeding me the latest and greatest gear (somewhat by choice, mostly by force), I’m not going to shell out top dollar for the year’s most buzzed products when last season’s will perform 90% as well at 50% of the cost. And many people in the outdoor community are looking for the exact same thing, so here’s some really great shit on sale:

Deuter Freerider Pro 28 SL – $75 (Reg. Retail $160; 53% off): I bought an older version in 2016, in a mad dash the night before my AIARE class. It’s one of the best ski purchases I’ve ever made. It’s well cushioned and supportive so that long carries stay relatively comfortable. The avy stash pocket, goggle pocket, and back panel access to the main body keep things organized and easily accessible (not to mention, they’re the perfect size to stash wet & dry gear separately). There’s more ice tool attachments and carabiner loops, making it more fitting for more technical tours, and I find myself using mine through the summer for single day climbs. The best (or weirdest) thing about the pack is that it doesn’t show any signs of age. There’s no signs that the ski edges are wearing through the ski straps, and even after total schwack routes where all my other gear comes out with holes or covered in dirt, this thing still looks like the day I bought it.

Black Diamond Alpenglow Women’s Sun Hoody – $38.25 (Reg. Retail $85; 55% off): This just arrived on my doorstep today, so I don’t have a ton of feedback. I just expect it’ll fix a lot of the things that annoyed me about the Bight Gear Solstice Hoody, like the length & lack of stretch. Pro tip: Silver Pine looks white, but is more of a really light seafoam green.

Kari Traa Women’s SJØLVSAGT Set – Starts at $20.98 (Reg. Retail $69.95, up to 70% off): There’s really nothing special about these base layers; they’re just like basic Cuddl Duds or Terramar but with super fun prints and patterns. This is the one time they’re priced accordingly.

Rab Infinity G – $224.96 (Reg. Retail 449.95, 50% off): I bought the Rab Infinity Endurance, which preceded the Infinity G, two years ago. It had everything I wanted in a summit puffy – Pertex inside and out to give it great wind protection and abrasion resistant, and great water protection inside and out where I didn’t have to worry about pulling it on during a snowstorm or sliding it on over damp layers. It wasn’t going to fit under my shell, and it’s durable enough that it doesn’t need to. The Infinity G adjusted the baffles and shed a little weight by only using slightly less burly Pertex Quantum and dropped a chest pocket. The Infinity G is getting dropped for the Zero G, but they’ve only launched that jacket in Men’s. Pro tip: Rab runs small, so if 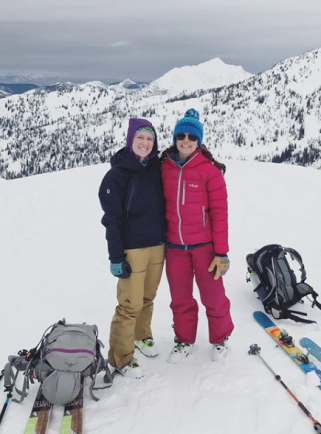 Mountain Hardwear Barnsie Insulated Jacket – $113.98 (Reg. Retail $285, 60% off): I bought this jacket 100% for the fun prints it used to come in (they’re still out there in select sizes), and I’ve been super impressed with its performance as an entry-level price-point jacket. It’s not for everyone, though. It’s a 2-layer proprietary waterproofing, which generally means it’s either a thick, less breatheable PU membrane or a thin one with unreliable waterproofing. This jacket uses the former. And the face fabric is a high-denier (read: beefy) woven that doesn’t help with breathability. At least the new colorblocked version stepped it up with better pit zips? But if you run cold and hate the feeling of wind cutting through your hardshell, this jacket’s a winner. Plus it’s super durable – I made the mistake of buying a white one and it’s gotten heinously dirty, but just won’t fall apart so I can replace it.