I love being with people during their BAMF Moments — the moments that people do things that intimidate them and push them out of their comfort zones and absolutely crush it so hard they almost re-evaluate themselves. Like, “Hey, check you out.”

The thing I love the most about being an Ambassador for PNW Outdoor Women is that I get to meet rad women and see a lot of BAMF.

This past weekend, I hosted an Ice Axe and Crampons Skills Sesh for the group and had the best time! (Seriously, it never ceases to amaze me how much I always like all these strange ladies from the internet). Most of Washington’s highest peaks are super accessible, but the glaciers and permanent snowfields across the state can make them a little icy and thus a little technical. Once an ice axe and spikes are in the picture, it looks like hardcore mountaineering. But the crew from PNWOW went out to Mount Rainier to practice and sharpen up on new skills. 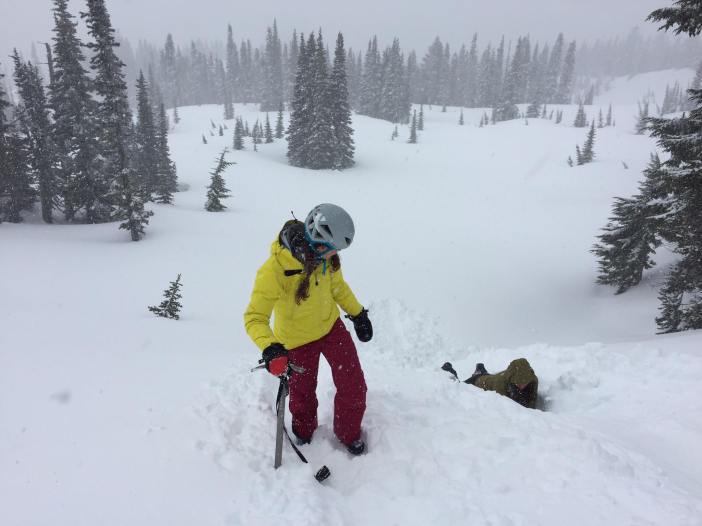 If you weren’t able to join us and want to get some practice on your own, here’s how it all went down:

We met at Paradise Visitors Center and were able to sneak inside for our introductions and to talk through some basic safety tips, especially for crampons, since most beginner snow scrambles don’t require much cramponing technique. A pair of micro-spikes are all you really need for most beginner snow scrambles, and people start to transition to a basic strap on crampon for steep slopes, especially icy terrain, and glacier travel, where a slip could be a lot more dangerous due to crevasse hazards. Whether you’re buying or renting, take the time to ask the salesperson questions and practice fitting them to your boots and getting them on and off. I know that whenever I’m grabbing rental gear, I tend to play it cool and try not to seem confused. Like, “If they see through me and figure out it’s my first time doing snow travel and using crampons, they won’t rent it to me.” That’s really not true. Once you sign the release form, they don’t give a fuck. Ask a million questions. Practice using it a few times. Even if your friends have their own pair of crampons or their own avalanche beacon, it might not be the same brand and the equipment might work a little differently where they won’t be able to help.

Then we headed out to the mountain to ass-plow ourselves a slope. Twice. The first round went straight into the closed snow-play area, but several families showed up with sleds anyways. It wouldn’t look great for the organization to slide crampon first into a couple tykes. And it was a little shallow for the sticky fresh snow that had just fallen (you know, in mid-April). We headed uphill to set up a second chute with a pretty hefty incline, but a nice, flat run out that steered clear of the trees. We practiced the proper glissade and self-arrest positions on flat land.

Then we got moving. Specifically, sliding. We took a few turns slipping through the chutes sans sharp objects to get comfortable, then with the ice axe for a few rounds of glissading and playing with the pick of the axe to brake and scrub some speed. We started working on the actual self-arrest from that position. The fresh powder kept us from getting that satisfying immediate halt, but it was at least enough to go through the motions and come to a controlled stop. 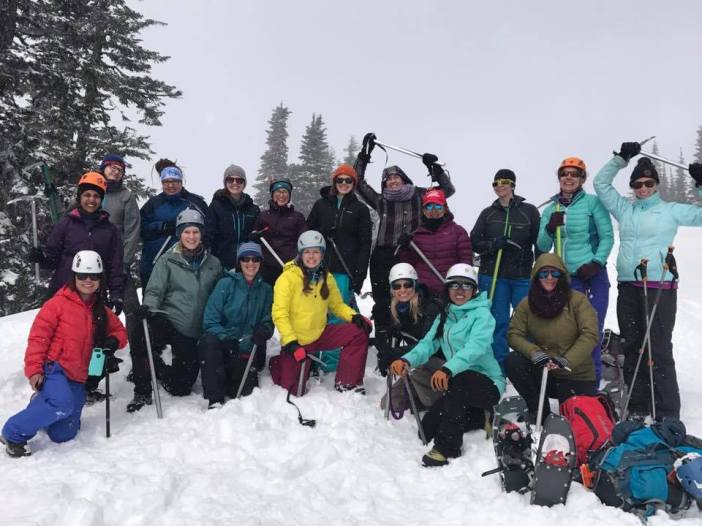 Slides feet first were easy enough, but people started reaching for their helmets or opting out once we started sliding head first on both the front and back side. I can’t blame them. People can – and do – sometimes injure themselves practicing arrests. They’re some vulnerable positions to be in. It’s just a trade off between taking repetitive, low level risk to get practice and being prepared in the off chance you take an awkward fall. I think it depends a lot on comfort level and the caliber of climbing that you’re taking on.

It never ceases to amaze me how quickly strangers from the internet become fast friends through PNWOW. I’m excited to see these chicks on Helens, Adams, and Ellinor this season and be part of their mountaineering journey.